Skip to content
Mansfield Chad Commemorates The Battle of The Somme

It was the war to end all wars, they said.

Yet, through four years of mass slaughter across the muddied fields of France and Belgium, one battle sits above all the others that has become infamously synonymous with bloodshed on an industrial scale – The Battle of the Somme.

The major offensive began 100 years ago this week, and was an attempt for the Allied forces to make advances on the Germans’ defensive line two years into the Great War.

It proved costly, becoming one of the bloodiest military battles in history.

It lasted four months and led to the death or serious injury of more than million men from both sides, yet July 1, 1916, proved the costliest of all, with 19,000 Allied deaths and another 38,000 injured in a single day.

But for the people of Mansfield, how were the full extent of the horrors made known to them in the first few weeks of the battle? 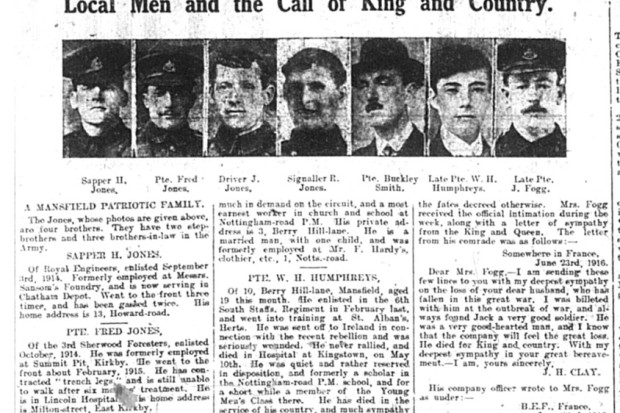 Here we take a look at the Mansfield Chronicle throughout July 1916.

From a publishing point of view, reporting on the most tragic battle in the history of the British military was not idea with the weekly paper hitting the streets on the morning of Thursday, July 6, a full six days after the engagement had started – and there is actually little mention of the offensive.

Only on the second page of the broadsheet newspaper is the war addressed, but only as part of a weekly column entitled Local Men and the Call of King and Country, listing those from the area who had joined up and those who had been confirmed killed or wounded.

Despite the huge death toll, there was little to outline the fierce fighting in the trenches.

So why had the bloodiest battle of all time been overlooked?

While technology and communication lines were primitive in 1916, it has often claimed that the truth was withheld from the pages of newspapers through rigorous censorship.

Details and vital information were kept from the media, possibly to mask how the war had been progressing, to prevent any anti-war feelings creeping into the British public.

This becomes apparent in the following week’s Chronicle.

A small column on the front page of the July 13 edition reports there had been “splendid fighting” in France with words from a “reliable source” at the Press Association.

It refers to the “cheerfulness” of the soldiers.

However, the propaganda becomes apparent on the following page under a column entitled Editorial Chat.

Although no name is attached to the piece, it opens with the line: “The war is clearly going very well indeed.

“The Allies are going to win. “What it will cost to achieve victory is impossible yet to foresee, but victory is already in sight.”

The facts of the battle may not have been known, but to print morale-boosting rhetoric without vital details is questionable.

However, at this stage we begin to see the first deaths from the Somme being reported under the regular page two column on July 13.

The first is 23-year-old driver GRB Hall, of Mansfield Road, Pleasley, who died a “noble death” near Albert, on the Somme, on July 1.

Following that is Sherwood Forester Corporal Ernest Allen, of Crown Street, Mansfield, who had been hit by a German shell on July 1 while leading his men in battle.

Only in the Chronicle from July 27 – almost a month after the battle began – do we begin to read an acknowledgement of the magnitude of the Somme, for which the phrase “the big push” was coined and printed.

This includes the wounding of Forest Town’s Lance Corporal A Richardson, a 19-year-old of Sixth Avenue, who was cut down by machine gun fire at dawn on the first day of the Somme.

For the first time, readers are also given a flavour of the psychological effects of fighting on the Western Front, with the report including details of how L/Cpl Rutter had previously been injured through mustard gas and “shattered nerves”.

This was followed by another mental breakdown almost a year before the Somme. The report ends: “He bravely took part in the great offensive, which was his last.”

The trickle of deaths from the Mansfield area continue over the months, some dating back to July.

What becomes evident through an appeal on the weekly page two column in August is that news of the dead is not filtered through official military channels, but through the soldiers’ families, which may explain the lack of chronology of deaths. In a footnote for the column in August, it reads that relatives can send in photos and details of their fallen loved ones, for “free publication” in the Chronicle.

However, while a steady stream of deaths continue to fill the page two columns as the weeks pass into months, reports of conscientious objectors begin creeping onto the front pages. Again, further propaganda to highlight the need for war and for everyman “to do his bit” maybe?

The July 27 edition reports on Walter Strauther, a man from Talbot Street in Mansfield, under the quoted headline “War Settles Nothing”. Having been brought before a Mansfield Tribunal, he says he would not “take part in the slaughter of his fellow man, with whom he had no quarrel”. The case was put back until August, but he was ordered to find “meaningful” work.