11 materials that could shape the future of construction

SuperMaterial is on at The Building Centre in London until 27 April.

Read about the 11 materials that could shape the future of construction – go along and visit the exhibition yourself on London next month.

As well as having interesting structural properties and allowing the creation of forms that would be almost impossible to sculpt without additional technologies, 3D-printed sandstone also opens up a new frontier in stone sculpture repairs.

Using this technology, stonemasons could repair and reconstruct eroded gargoyles on the sides of buildings and churches, for example. “They’ve shown that you can start to think very differently about how you create structures,” Mr Blackwell says.

Cymat Technologies creates its aluminium foam panels by injecting air into the molten metal. Once the metal cools and solidifies, the material forms around the pockets of air to give a high strength-to-weight ratio.

“It has decorative qualities, but it’s also very lightweight and can be 100 per cent recycled,” Mr Blackwell says.

The material is also made from 50 per cent recycled materials and has already been used as cladding on a number of projects.

Bamboo is a strong, lightweight material that has been used for a long time in traditional construction across Asia – particularly for applications such as scaffolding.

The Swiss Federal Institute of Technology in Zurich has developed a way to put the material to a new use: as a replacement for steel rebar in concrete.

The material is a mix of bamboo fibres and an organic resin, ensuring the bamboo will not degrade or rot. Bamboo absorbs large amounts of CO2, adding to its potential as a sustainable alternative to steel.

Building owners will spend money every year ensuring their facades are clean and free of moss. But what if we cultivated those micro-organisms instead of fighting them?

That is the idea behind BiotA Lab’s biologically receptive concrete, geometrically designed to promote the growth of mosses in selected areas.

With a bit of imagination, this could even be a viable alternative to large-scale green walls, which can often be expensive to maintain. This solution would require very little maintenance, with the spores reactivating and the moss re-growing as the weather changes.

“We live with this all the time. This is where we need to go with our buildings,” Mr Blackwell says. 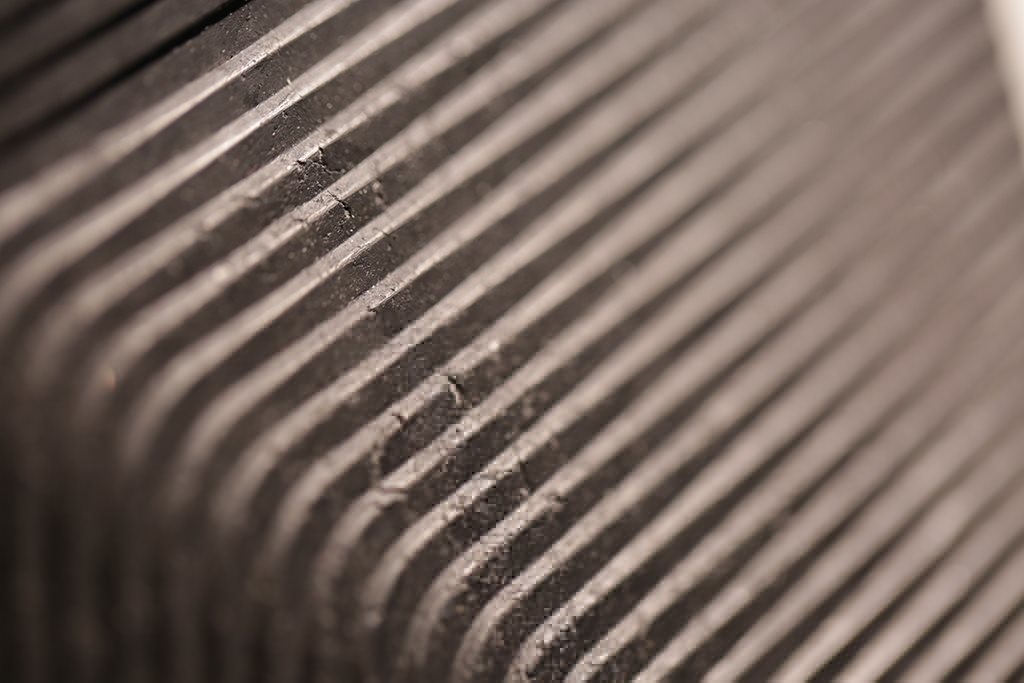 Façade made from pollutants

These black façade panels from Made of Air – part of Berlin-based manufacturer Elegant Embellishments – are made from biochar.

Biochar is a waste product produced when trees are burned in pyrolysis kilns for energy; while 50 per cent becomes heat energy, the rest becomes biochar.

“We clearly have issues with how cities work, so we’re working with something that could radically improve the environment,” Mr Blackwell says. “The built environment should be building an environment we can live in, making a positive contribution.” 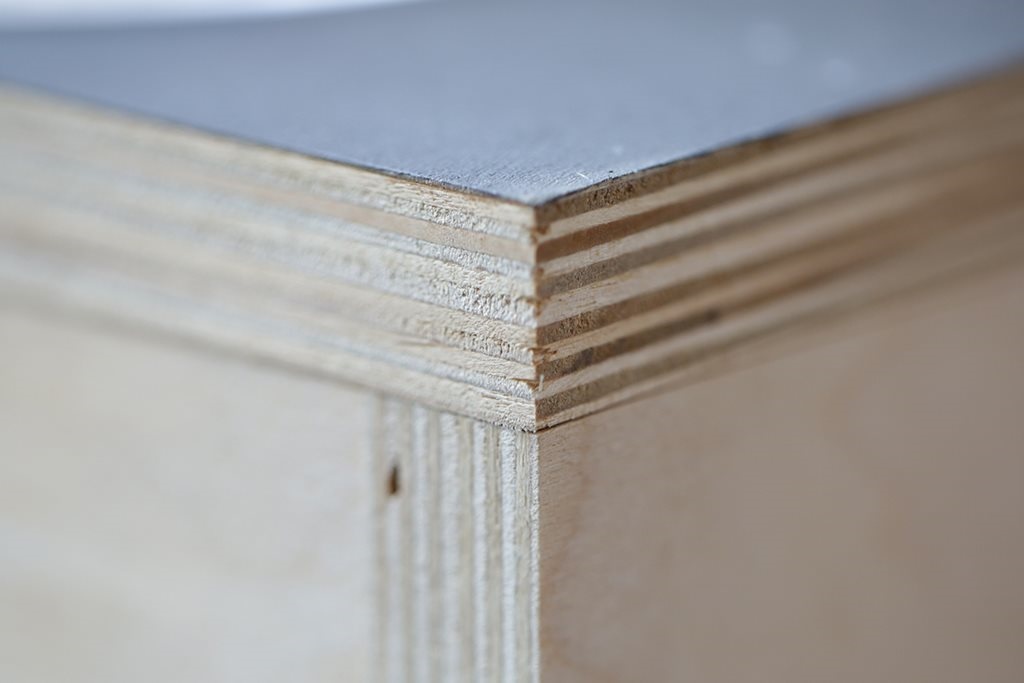 A combination of two materials technologies, this exhibit consists of UK-based Specialised Panel Products’ fire-retardant plywood, which saw the company immerse the layers of the plywood in a bath of Burnblock – a Danish sustainable fire retardant that works by blocking oxygen.

Once treated with this, even plywood won’t burn, so SPP then constructs the sheets from the marinated layers. Even when sawn, it retains its fire rating.

Here in the exhibit it has been topped with Proshield Premium, an acryclic emulsion paint that contains graphene.

While this paint is electrically conductive, it has also has extremely strong radiation-shielding properties, blocking mobile phone and television signals.

“It’s got huge potential for buildings like hospitals – and also even for schools, where you could paint the inside of a classroom in graphene paint to block mobile phone signals,” Mr Blackwell says. 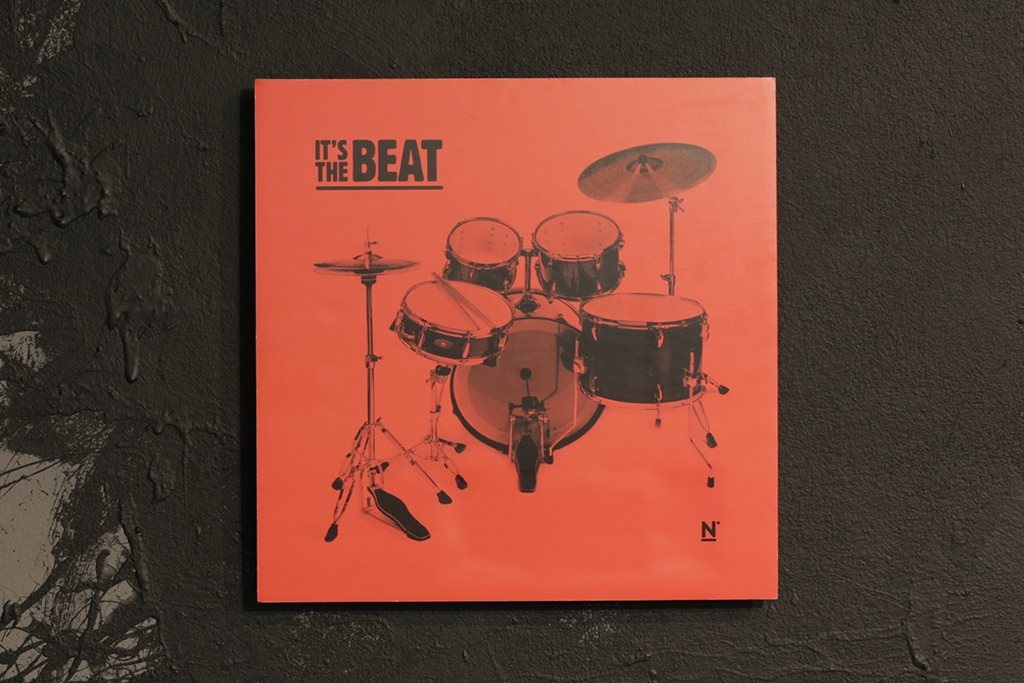 The world’s first ’two-dimensional’ material, graphene has long been touted as a game-changer for construction, with a £60m Graphene Engineering Innovation Centre set to open at the University of Manchester in 2018.

As well as being the strongest material known to man, graphene is also thin, light and a superconductor – with the latter property being explored here.

The exhibition shows off a poster on which a graphene-based ink is used to print a circuit directly onto paper – meaning that when users press the drum kit shown on the poster, they hear the sound they would expect.

One future for this could be realised in places like Piccadilly Circus, or even on exteriors of buildings more generally – flowing data through the graphene-covered surface of a structure. 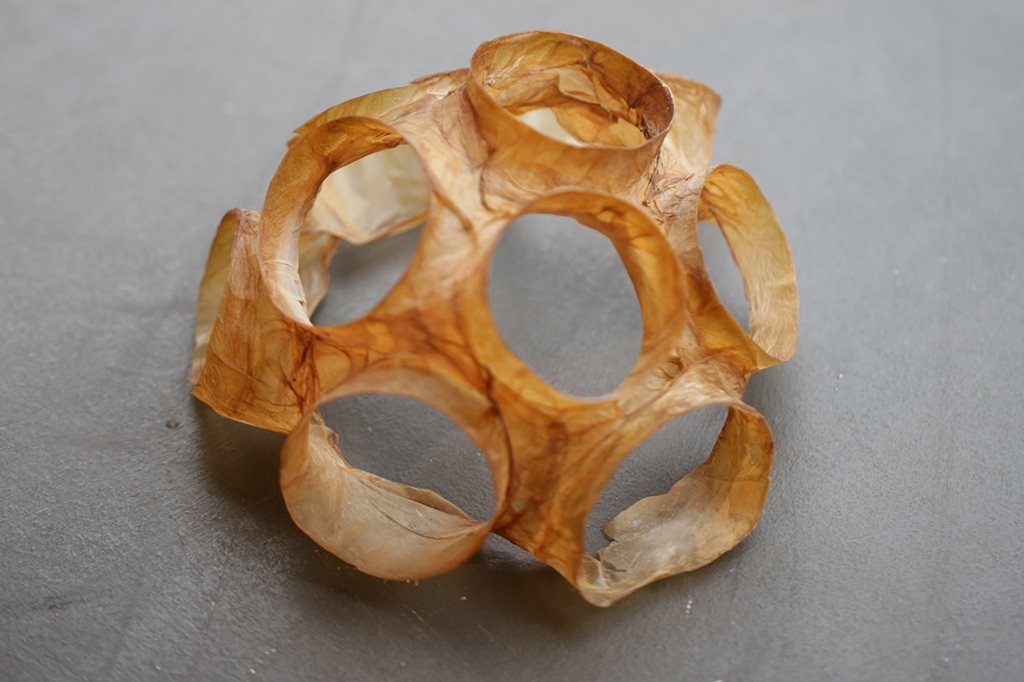 A range of projects in the exhibition carried out by ecoLogicStudio and the Urban Morphogenesis Lab have been looking into different ways of growing microbial cellulose.

This material is a symbiotic mixture of bacteria, yeast and other microorganisms, and the research teams have developed a way to manipulate them into layered structures – a form of bioplastic.

Practical applications for buildings are still some way off, but the teams are investigating whether microbial cellulose could be incorporated into building façades or tiles. 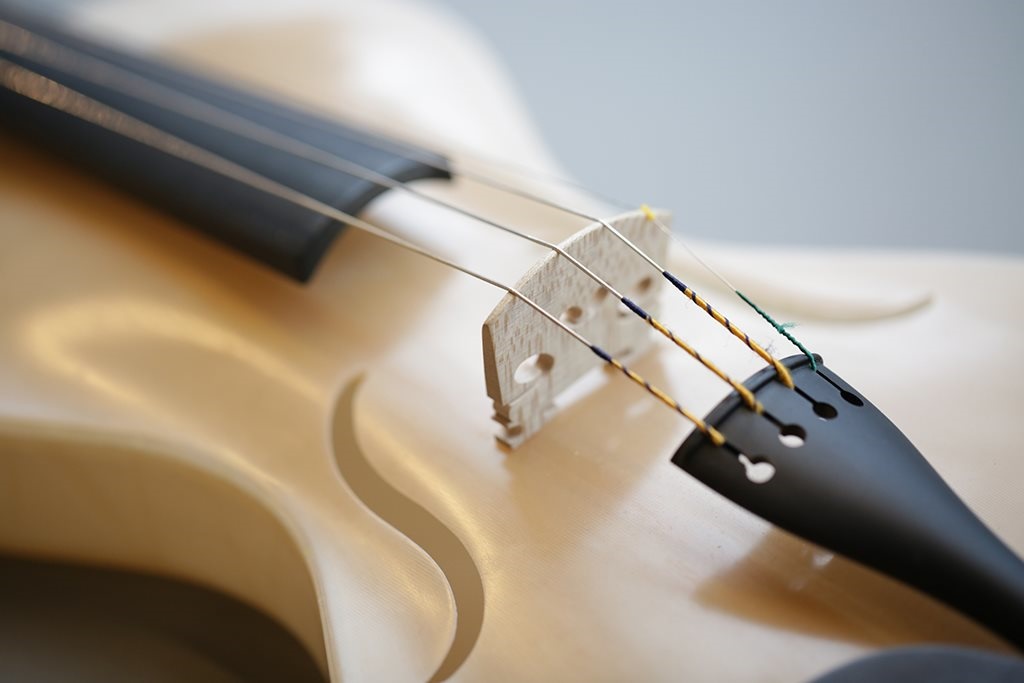 Italian student Luca Alessandrini has been experimenting with the properties of silk – and has produced a remarkable violin from the material.

As well as the body of the instrument itself being made from a silk composite, which with 3D modelling can ensure very high levels of consistency in sound, the violin on show at the Building Centre includes three Australian Golden orb-weaver spider silk strands that run up the back of its body.

“This silk is five times stronger than steel. If a man walks into its web, he can’t get out,” Mr Blackwell says. “People are researching how it works to see if you can synthesise it, because obviously it’s hard to train a spider to do what you want.”

And the spider-silk isn’t just about strength; it is also being used for its resonance properties, with the web used like a doorbell to alert the spider to trapped prey.

The next step for this material: acoustic tiles and panels. “What if a new concert hall had this material to help ‘tune’ the building?” Mr Blackwell suggests. 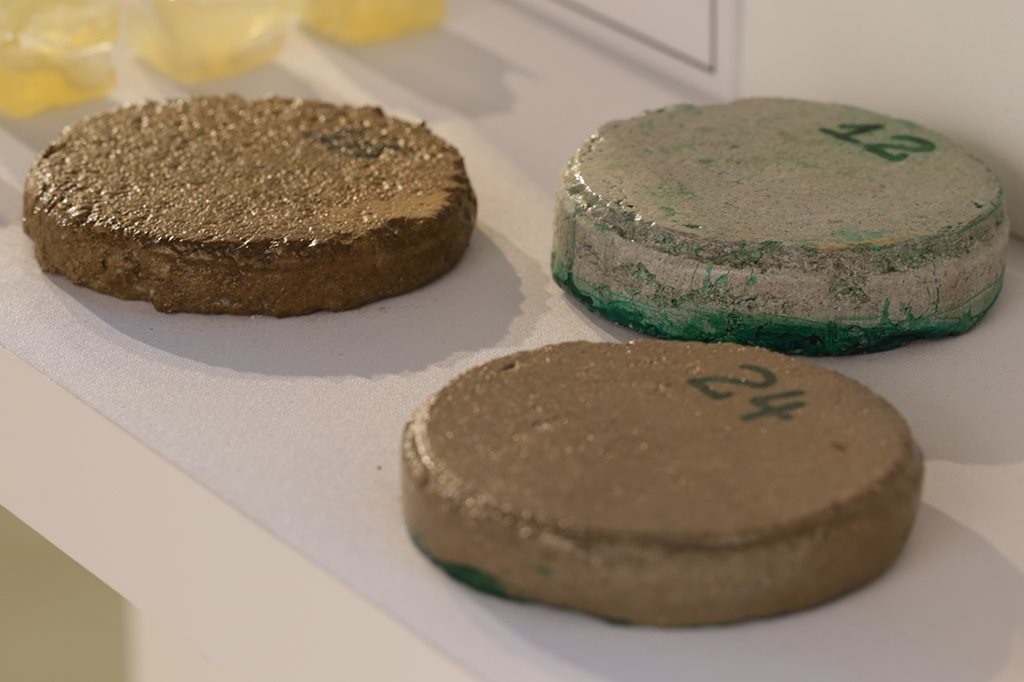 Here in Britain and other developed countries, we take sealed, stable roads for granted. But in the developing world, this is not always the case.

Created by Connecticut-based US firm Aggrebind, this material is a water-based styrene acrylic polymer that, when combined with water, can effectively bind dust and stabilise soil in situ, allowing for dirt roads to be made safe and stable.

It doesn’t need cement or excessive heavy machinery, either, making it a viable solution for poorer and more rural communities. Aggrebind says it can reduce the cost of road construction by 60 per cent, employing local workers in the process.

Mr Blackwell says: “This might be my favourite thing in the entire show, because it means a lot to the world. You roll in, spray it and it sets, so instead of the road getting washed away in the rainy season, it’s sealed. It’s very simple but it’s radical technology.” 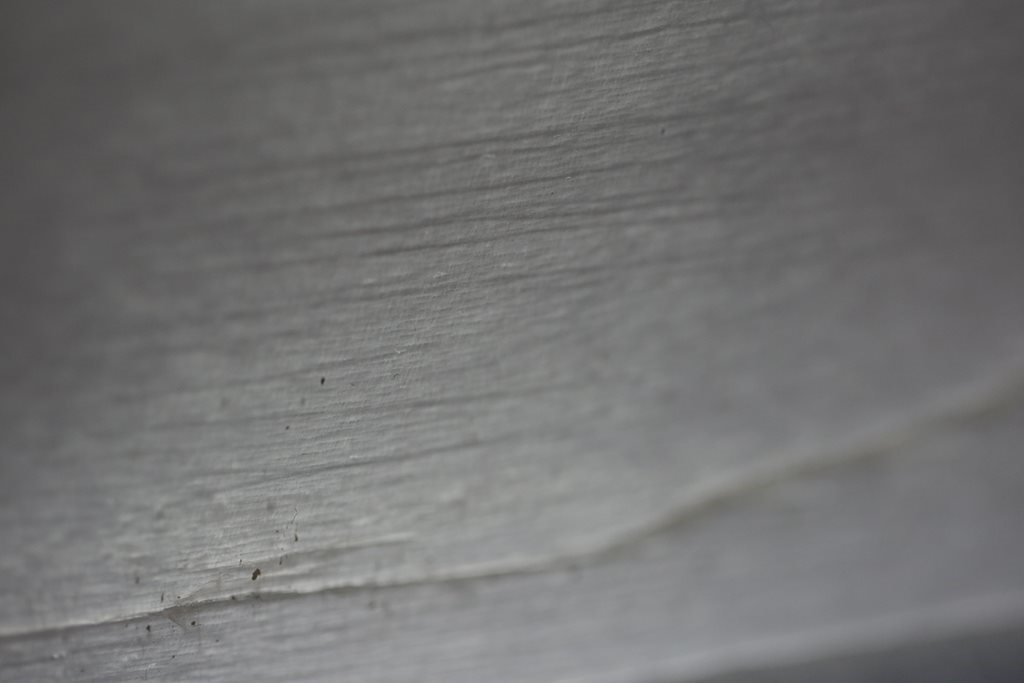 It’s wood, but not as we know it. Researchers have found a way to strip the lignin out of wood and replace it with a synthetic polymer, meaning that a strip 1 mm thick becomes 85 per cent transparent. Crucially, even though it is see-through it retains its strength.

Why bother making wood transparent? “Well, it has other properties, too,” Mr Blackwell explains. “The thermal properties are much better than glass, so if you could create large panels, it could be useful.”